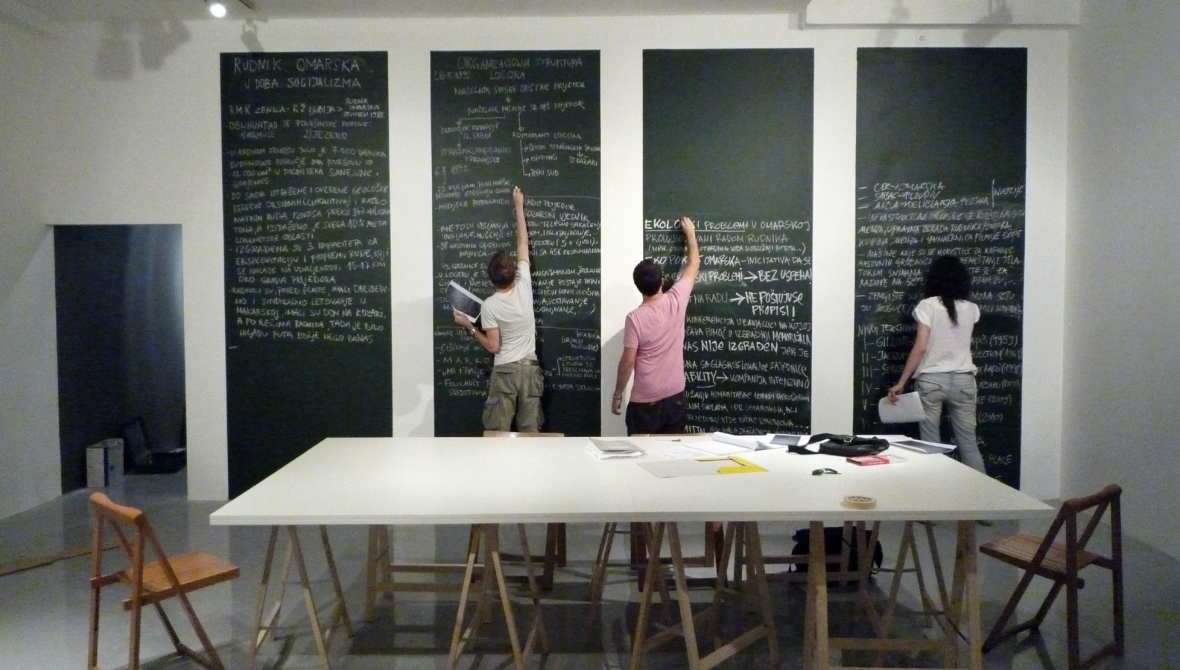 In April 2021 Radar worked with the curator Lívia Páldi to host a screening of and 'public montage session' around Milica Tomić's ongoing video work Four Faces of Omarska: Open Video Sequence, in collaboration with the AHRC Research Network 'Interdisciplinary perspectives in transitional justice', led by Cristian Tileaga of Loughborough University's Department of Communication and Media. The film employs a method that Tomic refers to as 'investigative memorialization'. Below, Paldi explores what this entails.

Coined by Tomić in relation to Four Faces of Omarska: Open Video Sequence, the concept of 'investigative memorialization' is defined as a non-commemorative, transdisciplinary and collective approach to memorialization. Taking distance from the forced and frozen reconciliation of conflicted sides, it understands that any act of memorialization cannot be a static stating of the facts. Four Faces of Omarska is an ongoing art project and platform questioning the strategies of memorial production from the position of those whose experience and knowledge has been subjugated, excluded and disqualified. Developed through collective investigation, Four Faces of Omarska explores what has been omitted from public remembrance and public history. Through continuous engagement with a wide network of people, experiences, opinions and discussions, the project centres around three main eras and four faces of the Omarska iron ore mine near Prijedor in northern the Serb-majority Republika Srpska, one of two semi-autonomous entities which make-up Bosnia and Herzegovina.

Beginning with the operation of the Omarska mining complex during socialist Yugoslavia, the research extends to the concentration camp run by Bosnian Serb forces on its premises, where the mass killing and torture of Yugoslav Muslims and Croats took place during the Yugoslav Civil War of the 1990s. Following the war, the mine complex was taken over in 2004 by ArcelorMittal, one of the world’s largest multinational steel and mining corporations. In 2007, it served as the filming location for the historical ethno-blockbuster St. George Slays the Dragon (Sveti Georgije ubiva aždahu), a Serbian film production.

The locating of mass graves in 2004 and excavations during 2006 opened a new phase of controversy, not only around accessing of the site (for survivors and families of the victims); but around forced reconciliation; the construction of a memorial; as well as how, decades after the Yugoslav civil war, the new states rest on neoliberal economic policies (massive privatization) tied in with nationalism, clerical interventions into state and public affairs, weak sovereignty, poverty, and increasing class divisions.

Featuring invited guests, the public montage and discussion session will address the mutual discontinuities and continuities of the history of the Omarska site as a means of surveying the demise of socialist Yugoslavia and the Yugoslav society. With a specific focus on the privatisation process and transition from societal property socialism to capitalism, the session will also discuss the theoretical, methodological and practical challenges of presenting visual documentation of collective investigative processes. Those present will be invited to participate in this process, with various contributions subsequently being added to the existing 'open video sequence' through future iterations of the work.