Bodies at Play: A Report 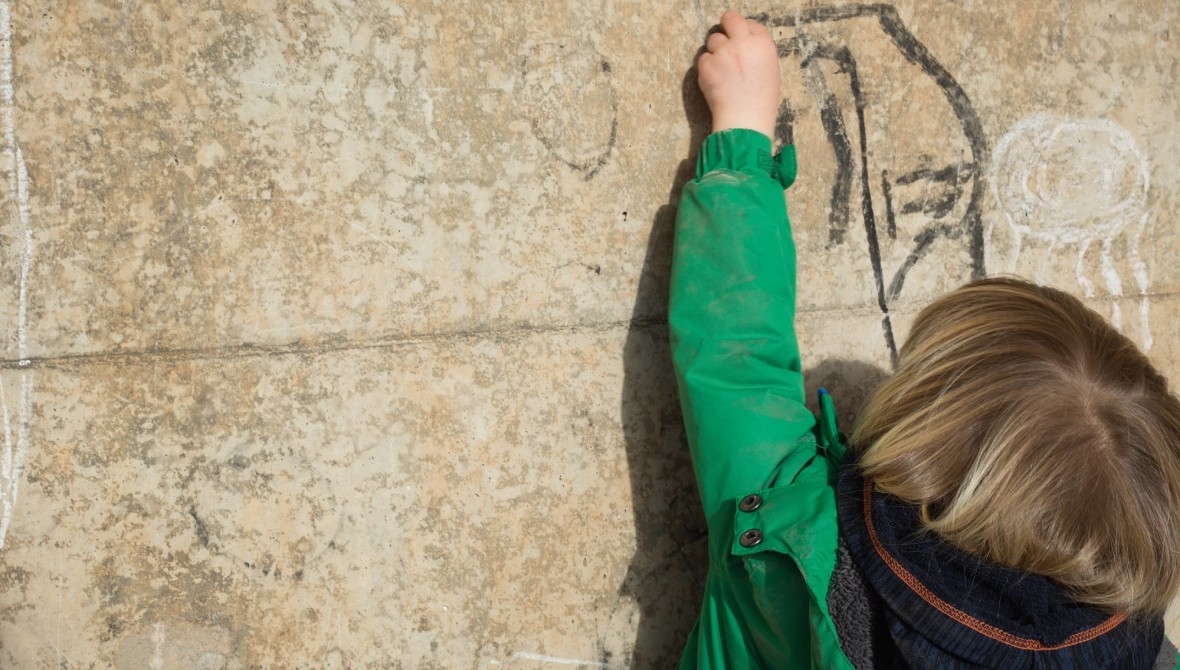 (Photo credit: Still from 'If play is neither inside nor outside, where is it?', by Helen McCrorie. Courtesy Collective Gallery.)

In October 2019 Radar organised ‘Bodies at Play’, a film screening and conversation concerning the role of ‘play’ in educational spaces. This was part of the public programme for This is just what I saw. Two Loughborough University students – Isobel Brann and Anna-Rose Wain – attended the event, and have written the following reflection.

Bodies at Play began with a screening of Helen McCrorie’s experimental film If play is neither inside nor outside, where is it?, followed by a fascinating conversation between the artist herself and Dr Sarah Mills, Reader in Human Geography at Loughborough University, and an expert in the geographies of childhood.

McCrorie’s film centres upon an outdoor playgroup on the site of an old military base and prisoner of war camp in rural Scotland. It opens with a shot of a young child exploring a secret garden-like environment of dilapidated red brick structures and young trees. The sounds of nature are amplified with birdsong prominent, but the screen soon changes to darkness. We hear a machine-like whirring and a child declares ‘it’s dark’ repeatedly. A haunting image is created; not unlike a dystopian land of sci-fi, and this sets the tone for the juxtaposition of wonderfully emancipated childish exploration with the site’s darker history. We are introduced to the data storage facilities inhabiting an old cold war bunker, accentuating the idea of data collection throughout.

“We are gatherers”, a voiceover declares, “we search for and interpret data and scan sounds for messages”. Indeed, sound is a prominent feature in the film, with wind chimes and buzzing ‘bumble bees’ amplified, emphasising the sensory aspect of the children’s learning from play. The sense of wonder is clear, emphasised with tinkling percussion and surprising pops. The natural environment is central too, becoming an ‘anarchic’ place of freedom for the children and contrasting greatly with the suffocating bunkers filled with old machinery and the ghosts of old military drills. The cold concrete architecture, now surrounded with lush greenery, is repurposed by the children as a site for play and exploration.

In the discussion, Sarah Mills highlighted this contrast, referring to the fact that the site (which once housed Nazi SS prisoners) is now largely owned by the community, standing as a space for growth and emancipation. They discussion also explored links between the playgroup’s use of the site and the privately owned data storage facility that is also present.

McCrorie cited the work of the paediatrician and psychoanalyst Donald Winnicott as a key inspiration here. She explained that Winnicott proposed play as providing the first opportunity children have to negotiate between internal and external space – to gather information and knowledge (data) about their environment as well as themselves.

Throughout the conversation, it also became clear that the boundaries between psychological and physical space aren’t absolute. The physical space the children are shown to navigate becomes, as McCrorie explained, ‘liminal’: neither inside nor outside.

Bodies at Play provided the audience with a range of new perspectives on the relationships between the physical environment, bodies and play. It proved a fantastic opportunity to learn through art and complimented Katarina Hruskova’s This is just what I saw, which also explores themes of liminality in education, very well. The event facilitated a fantastic dialogue between an academic and an artist, bringing visual arts into dialogue with research being done on our own campus.

Exploring the material cultures and politics of play through film and conversation. Read more

This is Just What I Saw