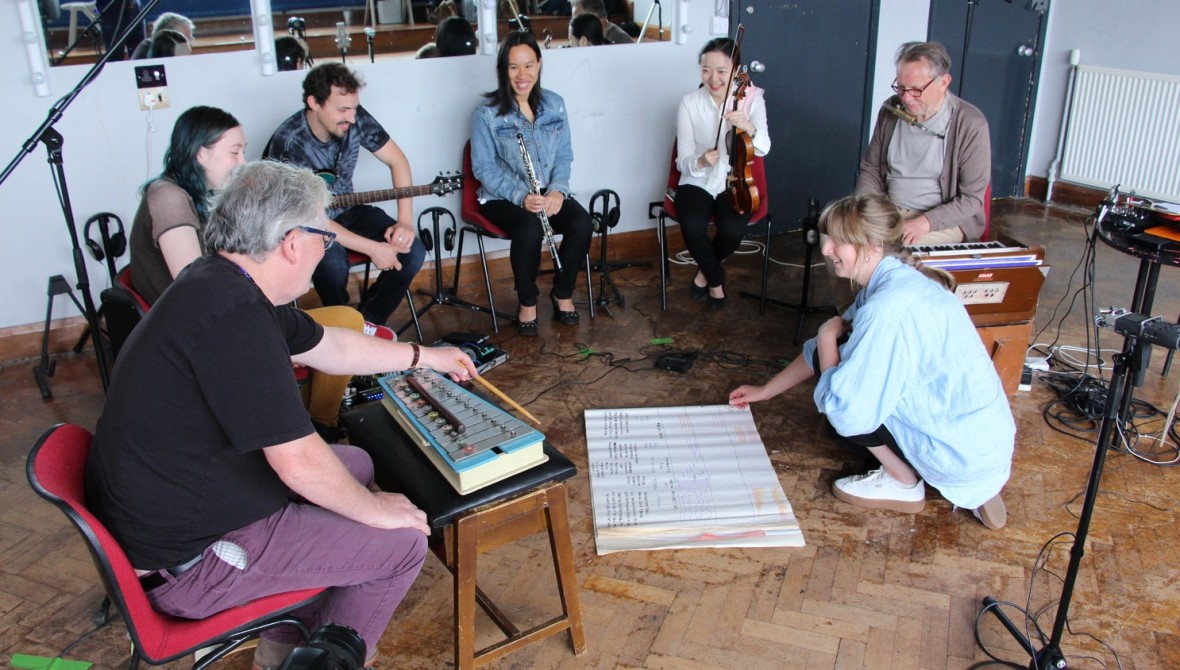 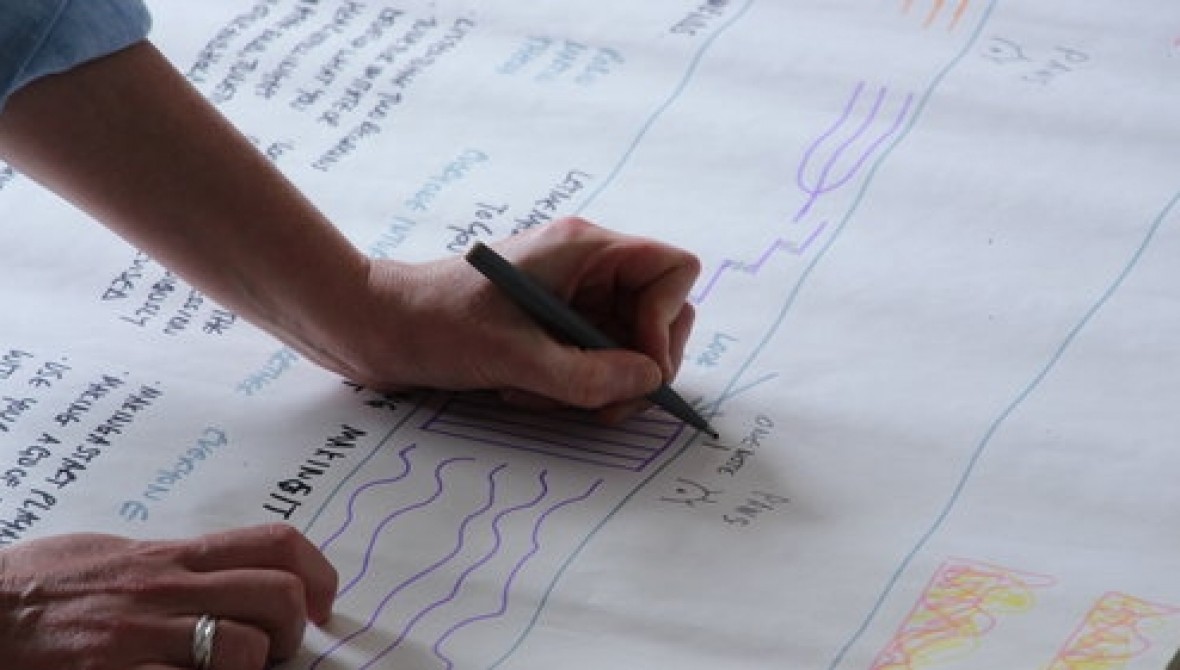 (Photo credit: The score in the making. Photo: Alison Lloyd) 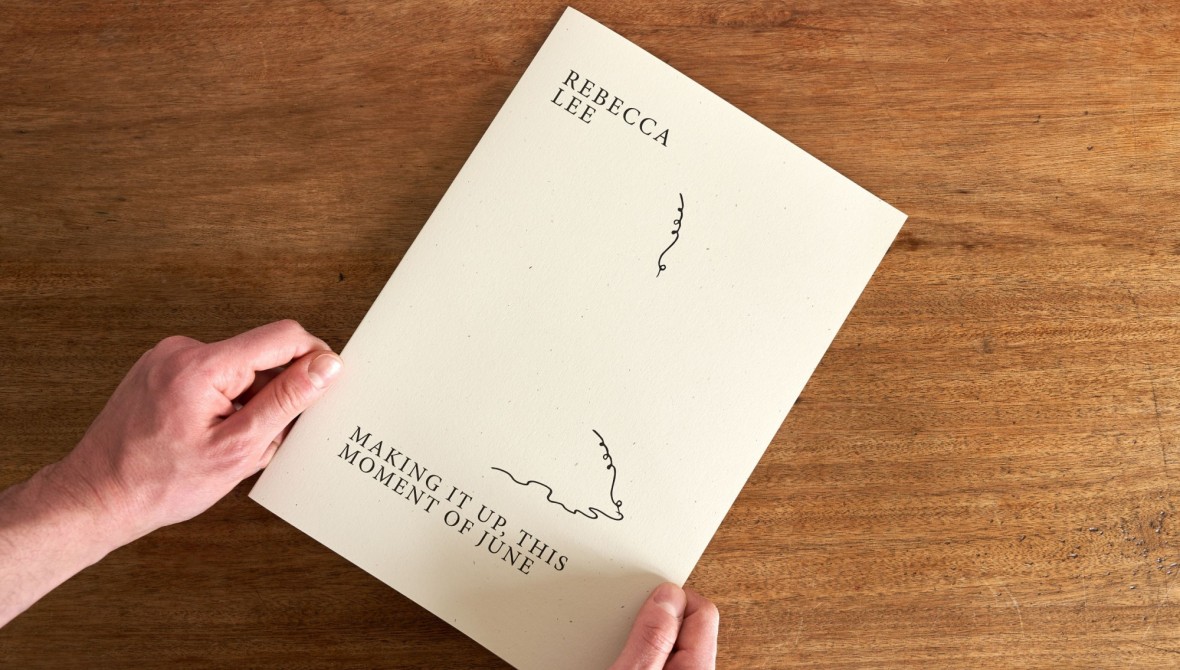 (Photo credit: The score, published with the support of The Hinrichsen Foundation. Photo: Reece Straw) 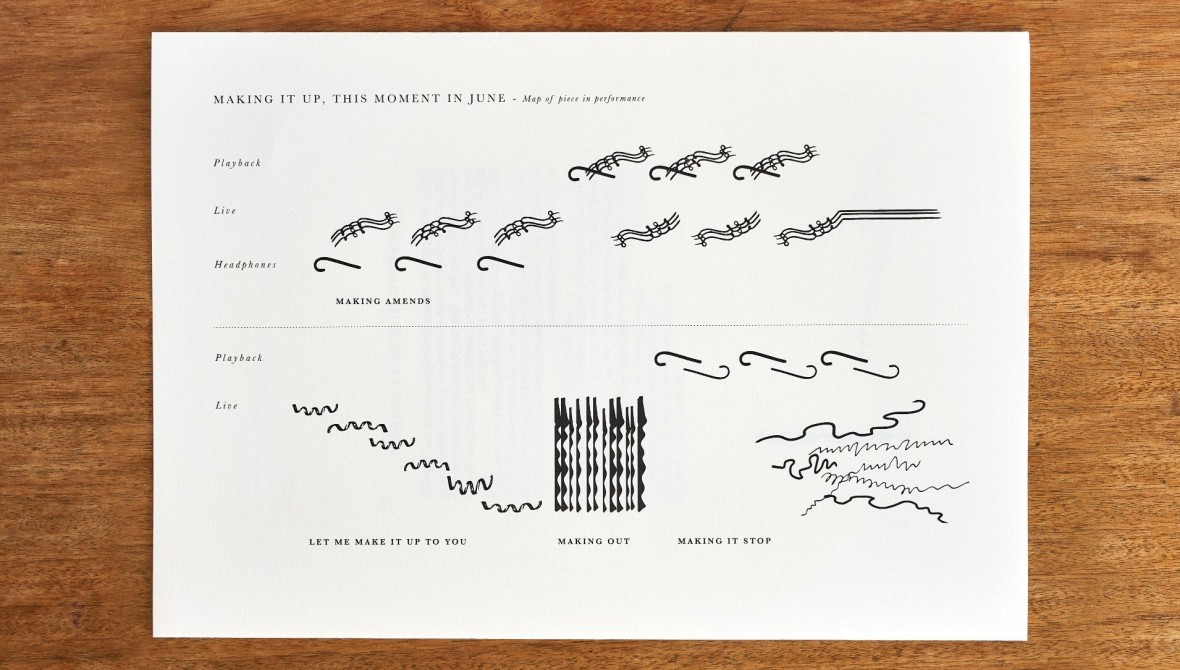 Making it up, this moment of June

‘…to understand how and why emotional labour is performed in particular ways, one must understand the complex nature of the contexts and spaces in which it occurs; as material spaces (and often technical spaces), as spaces of emotion and performance constituted by social and emotional relations, as relational time-spaces actively made and re-made by the practices of those working in them.’ Allan Watson & Jenna Ward, ‘Creating the right “vibe”: emotional labour and musical performance in the recording studio’

For (re)composition, Rebecca Lee produced a new performance score investigating forms and relations of listening that (re)produce and are (re)produced by personal and public places; and which extrapolates from non-musical, musical and technological forms of listening. This was informed by Allan Watson and Jenna Ward's research into the emotional labour in the recording studio and Doreen Massey's work on the relational nature of place. It was then refined through workshops with trained and novice musicians from Loughborough, in which the boundaries of music, place and registers of listening were traced. Many of these musicians then joined 'The Ensemble who are Making it Up', who in June 2018 took part in a live recording of the score in front of an audience in one of the University's music rehearsal spaces.

A printed version of the score is available for free through Radar: please click here for more information.

'The Making it Up Ensemble' June 2018 consisted of:

Rebecca Lee is a musician, artist and educator based at Primary Studios in Nottingham. She produces audio works, performance, site-specific installations, film scores, broadcasts and publications. Location is an important consideration to Rebecca’s work, as are the relationships between experiential, cognitive and cultural understandings of sound and musical materials. Musically, she is interested in improvisation; working with field recordings, site-specific composition/performance, collaboration and communication between “professional” and “amateur” music makings. Recent works include the site-specific ‘The Heavy Note’ at Brewhouse Yard Museum in Nottingham; an infinitely changing generative score to soundtrack Yelena Popova’s moving image work ‘This Certifies That’, and If the bell rings we will hear it, a touring musical research project in collaboration with Samuel Rodgers. As Bredbeddle she released the album Stackes through Fractal Meat records. Rebecca is an Associate Artist at Fermynwoods Contemporary Art.

Traversing geographies real and imagined, (re)composition explored the affective, material, physical and cultural dimensions of the interplay between music and place. Read more

Sounds from a Small Town

Score: Making it up, this moment of June

A publication of the graphic and instructional score for Making it up, this moment of June Read more