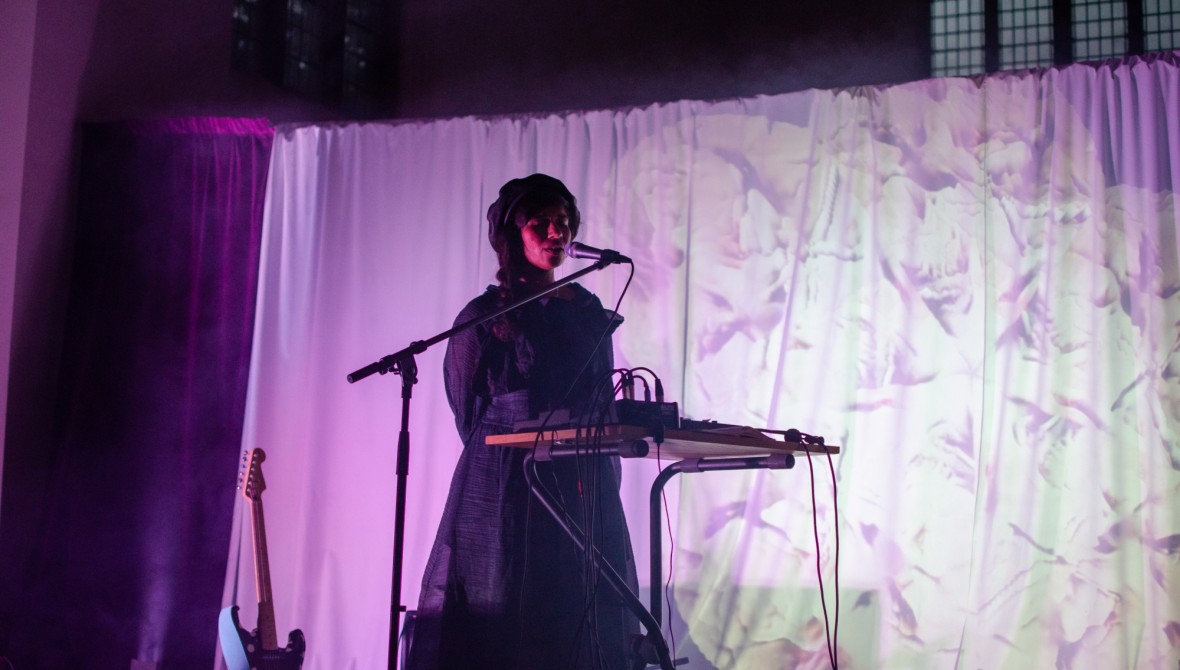 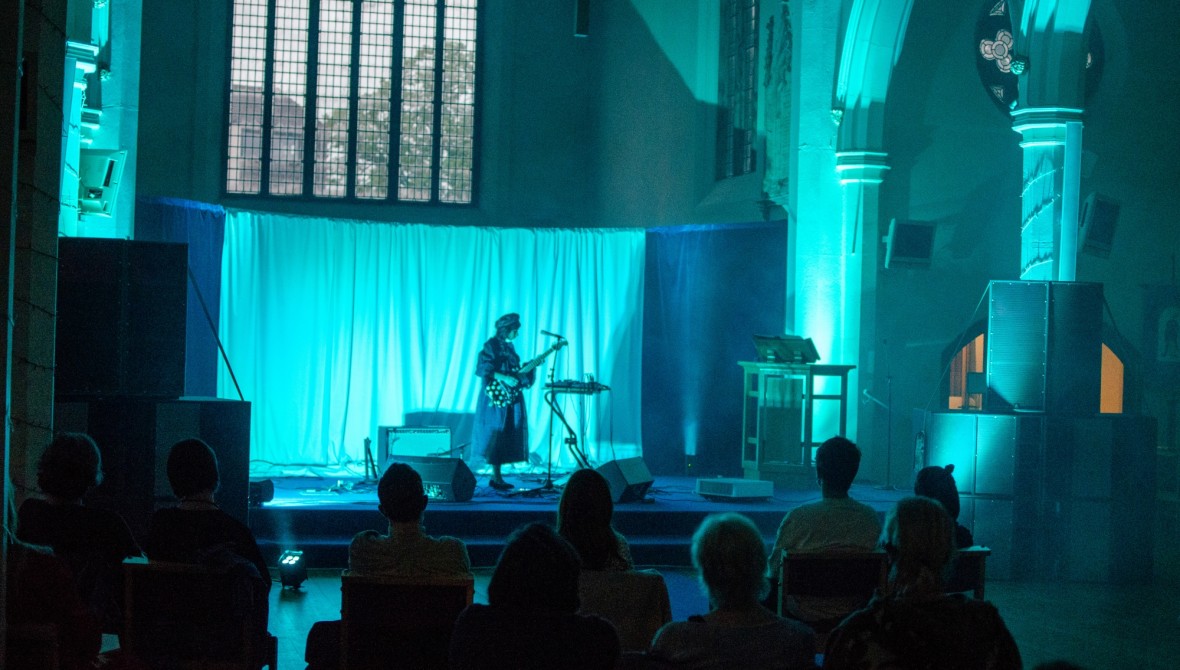 The Whole Earth Chanting is an audiovisual performance work by the artist Libby Heaney, produced in collaboration with musician Nabihah Iqbal and artificial intelligence. Pushing against widespread uses of artificial intelligence to manage (supposed) risks in the service of the status quo, it instead opens A.I. up to the possibility of new and unknown relations. Radar hosted the work's world premiere at Emmanuel Church, Loughborough, in June 2021. Heaney and Iqbal have since taken the work to other venues. Click here to view a performance from S+T+ARTS Festival, Barcelona in October 2021.

The work uses the power of voice, sound and music and the intimacy of performance to explore new expressions of belonging and collective identity between humans and non-humans. During performances Iqbal responds to chants generated by an artificial intelligence trained by Heaney on data ranging from Gregorian Chanting to the humming of equipment in the quantum physics lab. As religious chants blur with football fans’ singing, birds and Iqbal's voice, the  categories through which we usually understand the world are dissolved, creating a transcendental journey enabling the ‘other’ to enter and transform.

Artificial intelligence is typically used by big technology companies and governments to categorize and label, in order to sell us things and to control us. This inevitably embeds societal biases and unequal power structures within the code, putting certain groups at risk of prejudice and people and nature at risk of (even greater) exploitation. The Whole Earth Chanting subverts this use of machine learning. Rather than separating and dividing, the algorithm creates its own hybrid sounds by weaving together seemingly disparate categories.

This openness is informed by German theologian Rudolph Otto, who argued that breaches of ordinary perception occur through encounters with the numen praesens, the “wholly other” - an object whose nature transcends the known and breaks the boundaries of the conceivable, provoking unique emotional responses in those who encounter it. Chanting is one possible mechanism to move us outside or beneath the culturally known so that we might discover a self constituted by a plurality of human and non-human relationships. The reordering and blurring of reality by the artificial intelligence algorithm and Iqbal highlights how boundaries between things are temporary and their differences emerge only through relations. The release of emotion through the repetition of chanting therefore gradually disentangles the audience from the cultural scripts they usually perform.

The non-human ‘chants’ in the work were decided upon by finding matches between their spectrogram and a visually similar one for human chanting. The repetition of chanting mirrors the act of creating a data set for AI - around 2000 copies of an individual chant are needed in order for the machine to learn that sound.

The artificial intelligence algorithm and Iqbal's voice and instruments, (re)arranges, (dis)orders, (re)combes the material utterances of the human and non-human worlds, such that elements composing and informing what we know and who we are, the script to which the self is subjected, can be broken. Through emotion and identification with both human and non-human voices through the ritual of chanting, engagements and actions to embrace the “wholly other” are made.

Libby Heaney produces moving image works, performances, and participatory and interactive experiences spanning quantum computing, virtual reality, AI and installation. Her practice seeks to subvert the capitalist appropriation of technology, which seeks to categorize and control, causing alienation, prejudice and division (as well as an ever increasing depletion of resources). Instead, Heaney uses tools like machine learning and quantum computing to undo biases and to forge new expressions of collective identity and belonging with each other and the world.Libby has exhibited her artwork widely in galleries and institutions in the UK and internationally including a solo exhibition as part of the 2017 EU capital of culture in Aarhus and in group shows at Tate Modern (London 2016, 2019), ICA (London 2019), V&A (London 2018), Barbican (London 2019), Somerset House (London 2019), Sheffield Documentary Festival (2018), Science Gallery Dublin (2017, 2018, 2019), Sonar+D (with the British Council, Barcelona 2017), Ars Electronica (Linz 2017), CogX (London 2018), Telefonica Fundacion (with the British Council, Lima 2017). She is currently a resident of Somerset House Studios.

Nabihah Iqbal is a musician, producer, DJ and broadcaster from London. Her debut album, ‘Weighing of the Heart’, was released via Ninja Tune in December 2017 and has since garnered huge critical acclaim from the likes of The Guardian, Pitchfork, Dazed, and The Observer. She is currently an artist-in-residence at London’s iconic cultural institution, Somerset House, where she is writing and recording her second album. Inter-disciplinary projects form an important part of Nabihah's work and she has collaborated with artists such as Wolfgang Tillmans and Zhang Ding in the past. She has performed live at many of London's cultural institutions including the Tate Modern and Tate Britain, the Institute of Contemporary Art, the Barbican, and internationally at MoMA PS1 in New York, and K11 Art Institute in Shanghai. Aside from working on her own music and compositions, Nabihah is an avid DJ and music-collector and she hosts a bi-weekly show on NTS Radio, sharing weird and wonderful music from across the globe, which is inspired by her undergraduate studies in Ethnomusicology at the School of Oriental and African Studies, University of London. Nabihah appears frequently as a radio host on the BBC and has presented shows on BBC Radio 1, 1Xtra, Asian Network, World Service and 6Music.

The world premiere of a new work by the artist Libby Heaney, musician Nabihah Iqbal, and artificial intelligence. Read more

A livestreamed episode of Disasters Deconstructed exploring the social impacts of AI. With Libby Heaney and Simone Natale. Read more