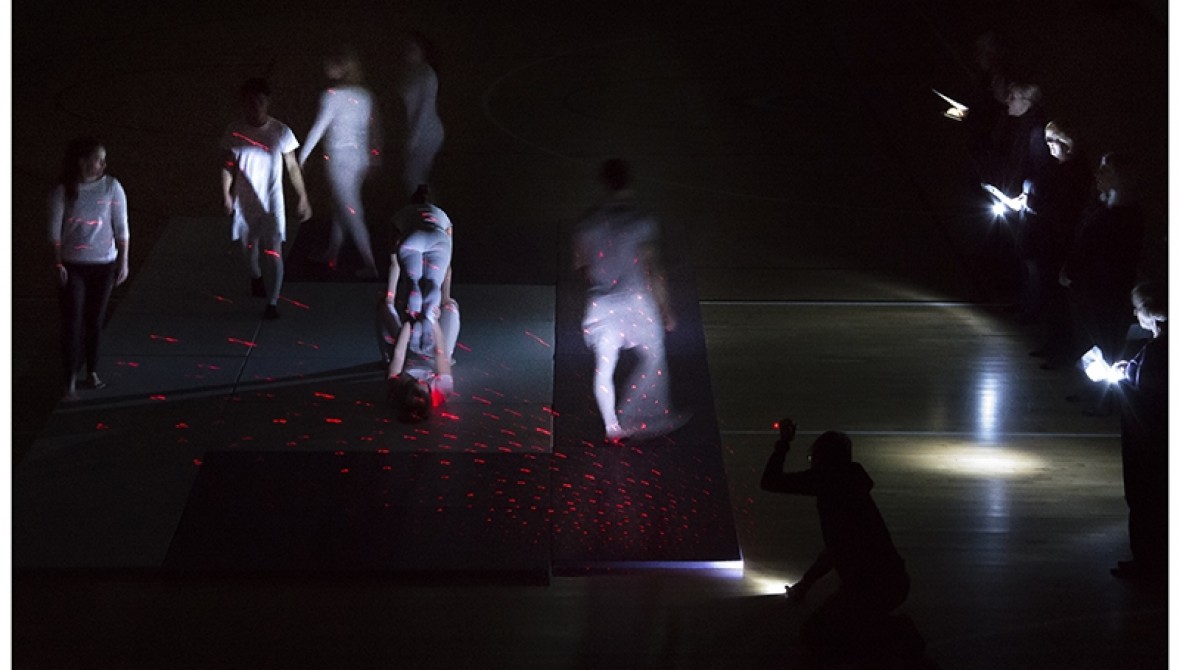 Who Can Separate Us Now?

A new performance commission that took place in the University's large Netball Centre, and was performed by gymnasts and singers. It  considered the university as an institution that encourages and requires students to be both ‘free thinkers’ at the same time as being part of the wider ‘student body’ –  a place of both social cohesion and dissent. The work tested this paradox of belonging and not belonging, of being together and separate, through a series of synchronised gymnastic movements and choral song.

Fifteen gymnasts and fifteen singers started at the corners of the space, gradually moving towards the centre in a series of orchestrated movements. The gymnasts’ movements became more complex, and the singing shifted from individual to choral. Words used in the songs were based on three university mottos: Who Shall Separate Us Now?; With Work All Things Increase and Grow; Lead Me From Darkness to Light.

Ben Judd’s work examines his relationship to specific individuals and groups, with the choreographic and the rhythmic used as a method of constructing temporary communities. The work explores how the ritualistic activities of marginalised groups and individuals can be extended into an action, and how, in turn, this action can be interpreted in a moving image work. Positioning himself and the audience as both participant and observer, Judd engages the grey area between ritual and performance, searching for an unreachable and idealised state of community. Judd has exhibited widely in the UK and abroad, including: ICA, London; Whitstable Biennial, UK; Tokyo Opera City Gallery, Tokyo; The Barbican Art Gallery, London; Royal Academy, London; International Center of Photography, New York; Impakt Festival, Utrecht, The Netherlands; Sprengel Museum, Hannover, Germany; The Photographers’ Gallery, London; Kunstbunker, Nuremberg, Germany; Whitechapel Gallery, London; Rotterdam International Film Festival; The David Roberts Art Foundation, London; Zendai MoMA, Shanghai; Chisenhale Gallery, London.