Late Night Bar/Europa by Will Bradley 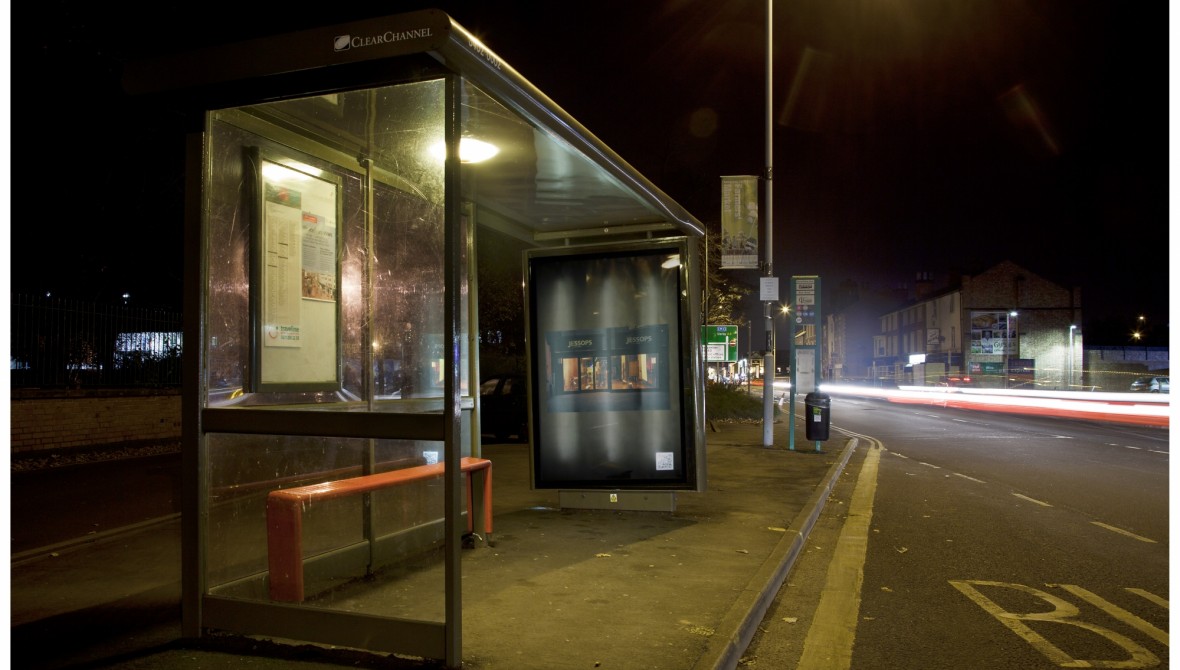 Following the performance of her Late Night Bar/Europa, Marianne Heier commissioned the writer Will Bradley to produce a text exploring the ideas behind the work. This was displayed on bus stops along Loughborough's Leicester Road, alongisde photographic documentation of the performance.

It’s 2am. The last dance. The music hasn’t stopped yet, but it’s slowed right down, and the lucky ones have found themselves holding on to something special, someone special. The party’s almost over, but the night has just begun. The darkness is alive with colour, the neon reflected in the chrome, but you can’t see it, because you’re lost inside the music. The music is everywhere, it surrounds you, and you feel it somewhere deep inside. You’re moving to the music, to the rhythm, but you’re falling. You’re holding on so tightly but you’re falling, in the darkness, and you’ve closed your eyes.

In the morning after, you walk home slowly, in that soft, cloudy light that can only show what’s here, the blank, banal reality. The closed-down cinema, rain-spattered pavements, empty shopfronts. A Saturday in town, kicking about, waiting for the spark that will light up the day, the week, the year. Waiting for the world to show us some sign of hope that we didn’t have to make for ourselves.

The people dancing in the photograph were taking part in an art project called Late Night Bar/Europa by a Norwegian artist called Marianne Heier. Around the Market Place, at 2am, three empty shops - the old Jessops, a closed-down butcher, a former travel agency - were unexpectedly illuminated in pink, orange, and purple light. Inside the empty shops, three couples danced slowly in the warm light, moving to a soundtrack of slow jams, end-of-the-party songs, that only they could really hear. For a moment, the whole scene had an air of unreality, as if a magic lantern show had come to life. On the street outside, the post-club crowds stopped to watch. Some of them heckled, or mimed their drunken understanding most explicitly. Some found it strange, some found it moving. Some simply looked. By the morning, the images have blurred, and all that’s left are hazy memories.

It may not be obvious at first, but Marianne Heier’s art project is somehow concerned with this buried dream of a different life, if only in the way that we now seem so disconnected from it, and from each other. The story we’re told is that the dream crashed because the banks crashed, and then something called the global economy crashed, and somehow that was all our fault, so now we all have to pay. In the UK that means £120,000,000,000 given directly by the government to the banks, or £6,000 for every member of the working population - enough to run the entire NHS for a year, and more than the annual budget for education or benefits. And that’s before you count the cost to all of us of the five-year recession that followed. The financial crisis, and the way that governments responded to it, or helped create it, set off a wave of protests around the world. The Occupy Wall Street protest in 2011 started an international movement that aimed to make extreme social inequality a central political issue. In the UK, the richest half of the population have 93% of the wealth, leaving the other half with 7%. The top 1% own 21%.

Marianne Heier’s art project can even be seen as an echo of these Occupy movement protests. These empty shops are places that the economy has abandoned because ordinary people have less money to spend. The dancers occupied them temporarily, not to make a direct political point, but to talk about lost possibilities. The difference between the dream we hold when we’re dancing, when everything is possible, when we’re most alive and we know that love and music and one more drink are all we’ll ever need, and the other reality of the morning after, the long, cold future. The difference between the dream of a world with a place for us in it, and the reality of system that would rather protect the profits of banks than the lives of the people that pay for them. It’s the last dance at Bar Europa. We’re all trying to live inside that moment for as long as we can, but sooner or later it’s going to be over, and we will all have to face, with sober senses, our real conditions of life.

Will Bradley is an art critic and curator based in Oslo. His publications include the books Art and Social Change: A Critical Reader (editor, Tate Publishing and Afterall Books, 2007), Self-Organisation / Counter-economic Strategies (co-editor, Sternberg Press, 2007) and the essays The New New Monuments  (Metropolis M, 2008) and Dreaming of Dreaming (for the 'Dream Politics' edition of UKS Forum, 2009). He has curated many exhibitions, including Forms of Resistance  (Van Abbemuseum, Eindhoven, 2007, with Charles Esche and Phillip van den Bossche) and Radical Software , on the underground influences on Open Source culture (Wattis Institute, San Francisco, 2006).